Archery club future up in the air

No shooting without a target

There has been no fire when it comes to the Delhi Belgian Archery Club since late September.

A group that currently meets three times per week and dates back to the late 40s is in a state of flux following a decision by the Delhi Belgian Club executive to close the facility's downstairs Shield & Friends Bar & Games Room due to financial concerns. Part of that includes the local archery club's shooting area and lounge.

A sign posted on the facility's door says the building's hydro bill last month was $5,700, and the upper-level banquet hall needs a new heating unit. Much of the issue stems from a portion of the 900 shareholders not making good on their annual $55 membership fee.

“We have to wait and see what happens,” said Mary Ann Pieters, head instructor for the club along with her husband George, both longtime Belgian Club shareholders.

“We're in a holding pattern and at the same time we're losing money.”

Pieters said the club was notified at their shoot on Sept. 28 that the downstairs portion of the building would be closed until further notice. Typically, she added, between 25-30 shooters pay $5 to take part in gatherings on Wednesdays, Saturdays and Sundays and another $5 per year membership fee.

“It's not an expensive sport,” Pieters pointed out. “For anybody that comes out to shoot archery with two or three kids, it's a night out for them, and the kids enjoy it. The only thing is, if we come back, we don't know if we're going to have to charge more to help us out.”

The Archery Club was being billed a very reasonable $50 per shoot as rent. Should the hall remained closed past an Oct. 18 shareholders meeting, Pieters

said she's not sure what the group's next move will be.

“The Archery Club needs a big facility – we need, say, 100 feet for sure, to shoot. Where are we going to go?” she asked.

“We want to try to keep it in the area of Delhi if we can.”

In addition to regular shooting nights, the Belgian Club also played host to tournaments. In fact, thanks to the success achieved by the club's men's contingent this past season, the building was set to host a 2017 national event in April.

Pieters said the club won't commit to any other locations until the shareholders make a final decision.

The recent closure of the downstairs bar and games room at the Delhi Belgian Club has left the Delhi Belgian Archery Club without a place to shoot since late September. Pictured, club instructors Mary Ann and George Pieters alongside Dan Spain (middle), president of the club's Saturday shoot. JACOB ROBINSON/SIMCOE REFORMER 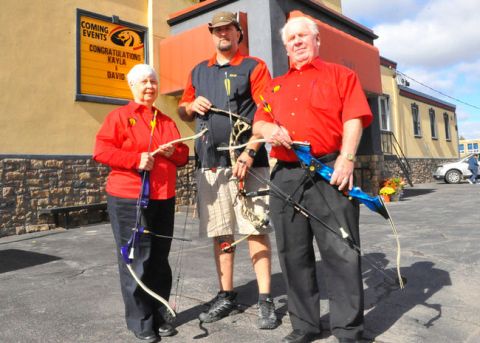